UVic Athletics: A Tradition of Excellence, The McKinnon Years by Tom Hawthorn (2015)

Cover of UVic Athletics: A Tradition of Excellence, the McKinnon Years

UVic Athletics: A Tradition of Excellence, The McKinnon Years (2015)

The publication also features a preface by Clint Hamilton, Director of Vikes Athletics and Recreation, and a foreword by former University of Victoria basketball head coaches Kathy and Ken Shields (who together led the university to 15 national championship titles). Together, the contributions in this volume reflect on 40 years of excellence in the history of the University of Victoria Athletics and look to a future of continuing success.

"From the outside, the McKinnon Building shows sharp-angled corners, walls framed by horizontal concrete bars, a bunker carved into the earth in the 1970s style. The main entrance is recessed, found only by climbing first one short set of concrete steps and then another. A brass plaque near the front doors presents this as the McKinnon Building, opened on February 15, 1975, and named in honour of Archie McKinnon 'in recognition of his unique contribution to Greater Victoria through his dedication to the athletic development of its youth.'"

"The McKinnon Gym is utilitarian, a serious place, and a visitor is not surprised to learn that at the end of term this is where rows of desks are arranged for exams to be written. It is not a sports palace, not a playpen for unpaid athletes who might soon find fortune as professionals, as is the case south of the border, but a venue for serious competition at a serious university by serious scholars. Those young athletes, studious and dedicated, make McKinnon their theatre and its wooden floor their stage. The attraction of a sporting match, its inherent promise, is the playing out of an unknown and unwritten final act of a drama. The resolution might involve chance, or it might be the result of days, weeks, months, even years of practice. McKinnon is a special place for the athletes who have competed there and for the coaches who have guided them.The nervousness of the locker-room before the game is cast aside in a rush of adrenaline once competition commences. Sport is liberating in temporarily relieving the athlete of all concerns - grades, romances, income - other than what it is faced in the game. In the stands, the athletes are cheered by friends and classmates, neighbours and generations of family. They have been led in their cheers by a character called the Mad Viking and now by a costumed mascot known as Thunder. Where else does daily life offer such spectacle?" 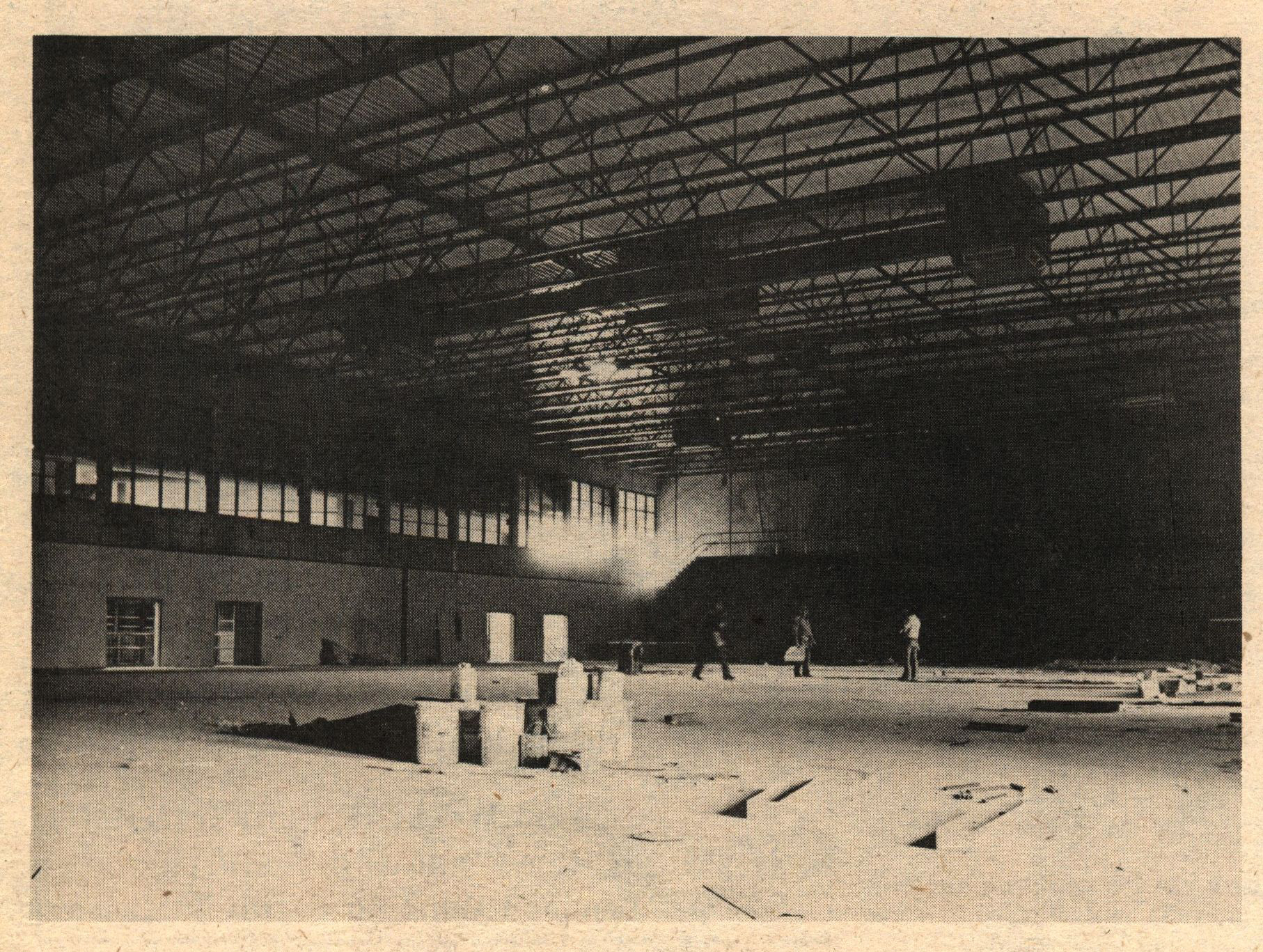 Construction of the McKinnon gym, 1974 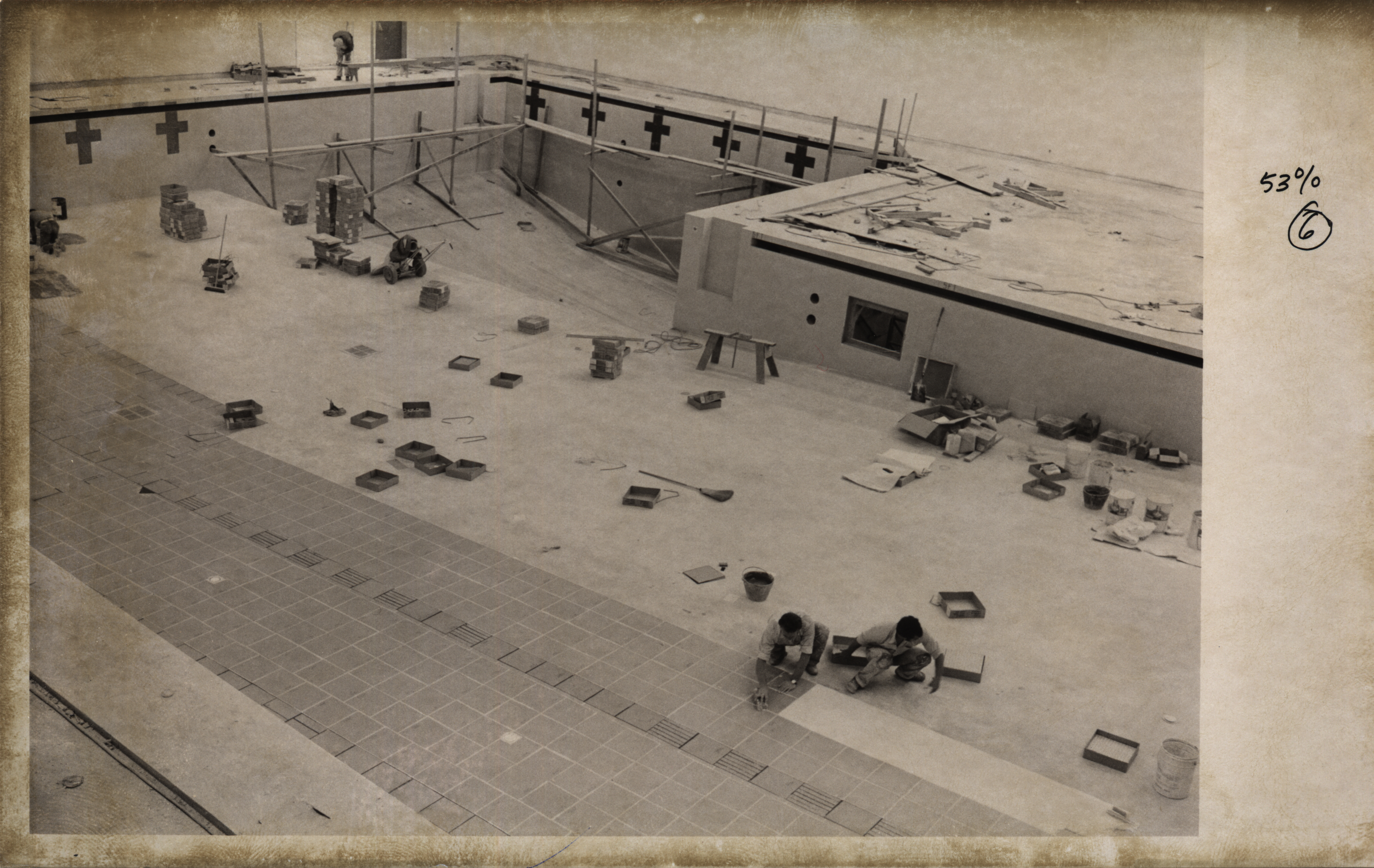 Construction of the McKinnon pool, 1974

"A Tryout to Remember"

"September, 1983. A basketball tryout at McKinnon Gym. A freshman student from rural Armstrong, B.C., steps onto the gym's wooden floor for the first time. He will be taking part in a scrimmage. On the other side are five players who will all go on to play for the Vikes, some even making Canada's national team - Gerald Kazanowski, Howard Kelsey, Ken Larson, Robbie Parris and Kelly Dukeshire. It was a daunting test for our freshman. 'The scrimmage was highly competitive and at an intensity (to) which I had never been exposed,' the freshman would recall years later. He learned an immediate lesson that would serve him well in years to come - 'Play as hard as possible and compete with every inch of my body.'As it turned out, the freshman held his own, helped in the scrimmage by playing alongside Eli Pasquale, Greg Wiltjer, Phil Ohl and Jay Triano, all of whom played for varsity and the national team. Our self-described naive freshman is Clint Hamilton, who would make the varsity squad before becoming Vikes director of athletics and recreation."

"In 1980, Debbie Scott won a five-kilometre race at the Lethbridge Country Club in Alberta in 17 minutes, 18 seconds. The runner-up finished a staggering 53 seconds behind. On the strength of her victory, the Victoria team won the Canada West University Athletic Association title for the first time and qualified for the inaugural university women's championship to be held a week later in Guelph, Ont. Scott finished 13 seconds behind a Guelph runner in the 5k run, but the Victoria team won the national title with 25 points to Guelph's 27. (The best five times of six athletes competing from each school were considered with one point awarded for first place, two for second, and so on.) Other runners with the triumphant Victoria team were Anne Harrison, Maeve Lydon, Debbie Campbell, Denise Kelly and Meghan Lambeth.

Born in Victoria, Scott is one of the greatest athletes to have worn the university colours. After a stellar university career, the slight, 5-foot-4, 106-pound runner competed in three Olympic Games (1984, '88, '92) and likely would have a fourth on her résumé were it not for the Canadian boycott of 1980 Moscow Olympics.

In 1985, she won a gold medal in the 3,000-metres at the World Indoor Games at Paris. The next year, she won silver medals in the 1,500 and 3,000m races at the Commonwealth Games at Edinburgh, Scotland. In 1987, she took silver in the 1,500 at the Pan-American Games in Indianapolis, Ind. She was inducted into the Greater Victoria Sports Hall of Fame in 2001."

"In 1984, coach Sandy Drever guided the women's field hockey team to an undefeated 10-0-3 season. The Vikettes scored 41 goals and only allowed two, earning them a top-seed ranking as they crossed Georgia Strait to compete at the national championship tournament.The Vikettes knocked off the Waterloo Warriors (4-1) and St. Mary's Huskies (3-0) to advance to a semifinal showdown against the University of British Columbia, arch rivals and tournament hosts. The match was tied 1-1 after regulation. In extra time, the Vikettes scored three goals.A continuous downpour of rain, as well as an unexpected snowfall, forced the championship game against the York Yeowomen to be moved off campus into the indoor splendour of BC Place Stadium. Midway through the second half, Eiko Tabata scored the game's lone goal to give Victoria its first field hockey title. Many more were to come."

"Rowing is not a sport for dilettantes. Practice is conducted at dawn. It can be cold, dark, wet. Strength and endurance are essential. The training regimen is gruelling, relentless, and unpleasant. A race is deemed successful if the athletes collapse in exhaustion as the shell crosses the finish line. For 32 years, the coach overseeing the woman's program has been Rick Crawley. His personal motto: 'Humble in victory, gracious in defeat.' Over the years, Crawley has had reason to be humble. He has guided the Vikes to 11 Canadian University Rowing Championships, including a string of seven consecutive titles. The championship banners hang in the Elk Lake boathouse, a reminder of the program's great success. Of the 172 athletes from UVic who have competed at the Olympics, 102 have been rowers."

"Rugby sevens is a fast-paced game featuring sprinting, quick passing, and big hits. Each team has only seven players, hence the name. Matches last just 14 minutes with a free-flowing style of play. The sport, which favours agile and fleet athletes, will make its Olympic debut at the Summer Games in Rio de Janeiro in 2016. This newest addition to the university's sports repertoire has achieved great success, winning four national championships in five seasons.The inaugural university championship for this growing international sport was held on the campus of the University of British Columbia in Vancouver in March 2011. The Vikes dominated their round-robin pool, allowing just seven points in three matches as they rolled over McMaster (19-0), UBC Okanagan (29-7), and Calgary (38-0)."

A New Era: From McKinnon to CARSA

"At the final basketball game of the 2014-15 regular season, the crowd cheered a parade of former coaches and athletes, still carrying themselves with the assurance of those who have competed at a high level, who have chased excellence, who have tested themselves against others and have not been found wanting.

A new era begins in 2015 with the opening of CARSA (Centre for Athletics, Recreation and Special Abilities), a state-of-the-art facility certain to become a landmark in the region. The building includes a 2,100-seat performance gym, a field house for court sports, a fitness and weight-training area, squash and racquetball courts, a dance space, a yoga studio, a rowing ergometer centre, a sports therapy clinic, and offices for Vikes Athletics and Recreation. It is also home to the Peninsula Co-op Climbing Centre, with a 16-metre climbing wall and bouldering area, as well as CanAssist, which develops technologies and programs to improve the lives of those living with disabilities.

The magnificent building, with as much floor space as three football fields, is a worthy reward at the conclusion of the McKinnon era, a time of great achievement which will be remembered not so much for the building itself but for the people who competed within its confines."

< The Transgender Archives: Foundations for the... Fronts of Modernity: The 20th-Century... >