The Seghers Collection: Old Books for a New World by Hélène Cazes (2013)

Written by Hélène Cazes, professor in French and Medieval Studies at the University of Victoria, this monograph outlines the bibliographic history and cultural significance of the Seghers Collection, which contains the personal library of Charles John Seghers (1839-1886), the second Archbishop of Victoria, and additional volumes contributed by the diocese after his death. The Seghers Collection was recognized by the Alcuin Society Awards for Excellence in Book Design in Canada in 2014.

A bishop without books is a soldier without arms.

Portrait of Charles John Seghers at his ordination. (Image courtesy of the Royal BC Museum, BC Archives.)

In 1976, the University of Victoria Libraries acquired the approximately 4,000 volumes that comprise the Seghers Collection. Its holdings include the remarkable personal library of Charles John Seghers (1839-1886), the second Roman Catholic bishop of Victoria (appointed in 1873), and additional works later contributed by the Catholic diocese of Victoria. Seghers amassed an extraordinary collection of books during his time working as a missionary in Europe and the Pacific Northwest, and, after his untimely death in 1886, many other bishops, priests, and parishioners donated books to the diocese that became part of the collection. This collective provenance accounts for the diversity and richness of the holdings, particularly its comprehensive collection of theological books. Bishop Remi De Roo discovered the collection in the 1960s and resolved to have it transferred from the rectory next to St. Andrew's Cathedral to the library at the recently founded University of Victoria, both to ensure the collection's preservation and to make it accessible to the scholarly community. In 1999, Bishop De Roo generously bequeathed his own private materials as well, further augmenting the holdings, and donations continue to be made to the collection even now. As it continues to grow, the Seghers Collection remains on permanent loan at the University of Victoria Special Collections and University Archives, where it serves as an invaluable source of scholarly interest and cultural heritage.Below is a series of excerpts from the volume about the history of the collection's acquisition, its history of use, the doctrine of the Church, and books of worship housed in the collection. We invite you to browse the listings for the Charles John Seghers Collection and the Seghers Book Collection.

Volumes from the Seghers Collection in Special Collections at the University of Victoria Libraries.

From "A Brief History of the Seghers Collection" by Christopher Petter

"It was 37 years ago when boxes containing 4,000 volumes of the Seghers Collection arrived in Special Collections at the University of Victoria. Howard Gerwing, who was Special Collections librarian at the time, and his assistant, Dietrich Bertz, spent many hours unpacking, dusting and vacuuming the books before taking them upstairs on book trucks to be catalogued and classified. June Thompson was the head of Cataloguing, and at the time, there were nine or ten professional cataloguers on staff. George Hruby, a cataloguer who could read and write Latin, was assigned to catalogue the bulk of them. Cataloguing began in June 1978; it took the cataloguers until September 1979 to complete the original catalogue records. . . . From the late 1970s until the early 1990s the collection received little very little attention but was preserved in compact storage by Special Collections. In October 1994, Nicholas Barker, the distinguished editor of The Book Collector and former head of conservation at the British Library, visited the library on a Lansdowne Fellowship, and I asked him for an assessment of the Seghers Collection. He wrote:

– Nicolas Barker, editor of The Book Collector and former Head of Conservation at the British Library

In 2005, Dr. Hélène Cazes, a specialist of Renaissance literature and an associate professor at UVic, became interested in the collection and began her research and teaching with it. Although I do not think she ever read the Barker report, her research fulfilled the three goals set out by Barker in his assessment. Hélène's enthusiasm has been infectious and with her use, interest in the collection has grown substantially. Special Collections feels doubly blessed to have a teaching classroom in which the books can be used by students and a storage vault where they can be better conserved."

From "The Doctrine of the Church"

"The Seghers Collection contains at least 163 treatises of canon law, 61 collections of papal acts and bullae, and 31 collections of conciliar acts (decisions of the ecclesiastical councils determining the orthodox positions). Considered as the foundation of Christian life and practice, these collections of ecclesiastical law are often among the most beautifully printed books of the Renaissance. Always becoming bigger with the passing years and centuries - since nothing could be discarded - these books bear testimony to the grandeur and authority of the Church, and serve as 'second arks' that could be displayed to all on church lecterns. After the Council of Trent (1559-63), when the ecumenical assembly gathered to answer the Reformation's attacks and specify the doctrine of the Church, these books, being the ambassadors of Catholic doctrine, attained the summit of luxury and craftsmanship.

The collection also contains numerous guides and textbooks developed to classify and complement the mass of canon law documents and discussions. These become increasingly complex with the effects of accumulation and variation over time. The everyday practice of the doctrine, for example, is represented by different kinds of theology, including practical, dogmatic, and moral. These are determined by at least 30 treatises of moral theology, 25 treatises of theological ethics, and two dictionaries of cases of conscience, all intended to help the believer in his or her decisions. Works of synthesis, such as annals, almanacs, and summaries (notably by Baronius), are represented by more than one copy for each title. . . . Books on exegesis, the interpretation of the scriptures, are very well represented, offering some of the most spectacular examples of book art from the Counter-Reformation. Here, titles with ornate compartments and frontispieces speak to the high level of typographical sophistication put in service to the Roman Catholic doctrine." 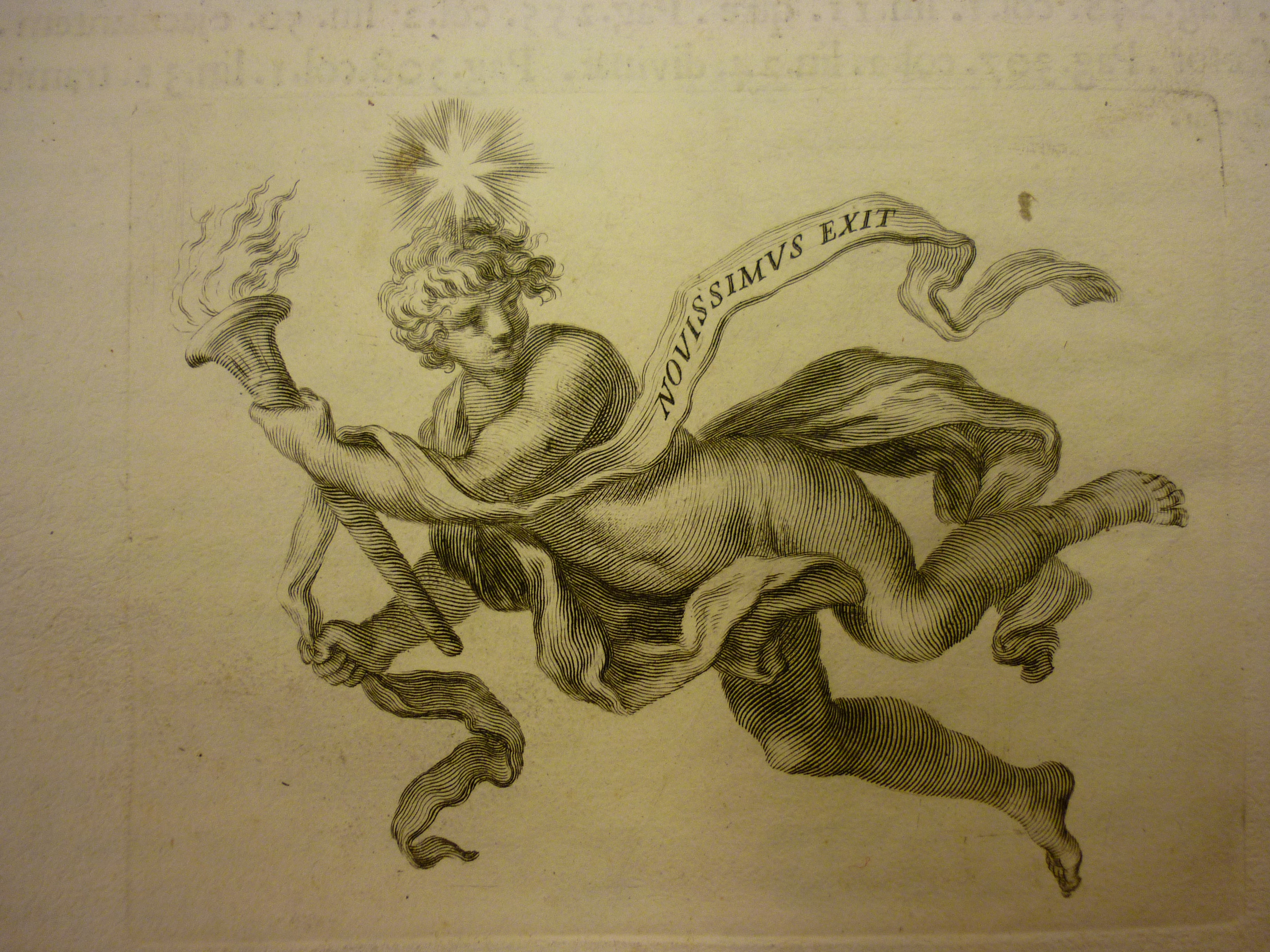 No title available.
Bookseller sticker from the Librairie ecclesiastique de Toulouse & Taranne pasted in a 1608 edition of Martin Del Rio's Disquisitionum magicarum libri sex (Six Books on Recognizing Magic), which was first published in Lyons in 1599.

From "The Many Memories of the Seghers Collection"

"The larger (and mainly European) tradition of the Roman Catholic Church is present not only in the titles and contents of the books, but also through the succession of owners and users - monasteries, convents, Catholic schools, and Catholic readers - who left their names, and often, their annotations, within the ancient books brought from Europe and America to build the library. One of the most striking examples of this evidence of use is a volume composed of indexes of the Bible [right], complemented with a set of leather tabs on the fore-edge which forms a set of marks called a 'keyboard' and containing a blank quire for adding text. Printed by the heirs of the great Antwerp printer Plantin (1520-1589), the book was once the property of a Dominican monk. He, or perhaps another owner, copied in the last part of the book the preface to another set of indexes.

Owners and readers of different generations, centuries, and places meet in the margins and title pages of these books. It is not uncommon, for example, to see more than one name on a title page, with later owners erasing or cutting off the marks, devices, or signatures of earlier owners. It is also fairly common to find booksellers' stickers in the corner of an inside cover competing with the stamps applied by monastery librarians. These signs are revealing evidence that a book was initially part of a seminary library; then, probably during the forced secularization of the French Revolution, it was extracted from its place and sold to sellers and collectors before it was finally acquired by Seghers or other Victoria Catholic readers."

This Paris bookseller sticker (right), for example, was placed in a 1608 edition of Martin Del Rio's Disquisitionum magicarumn libri sex (Six Books on Recognizing Magic), first published in Lyons in 1599.

"As a diocese library, the Seghers Collection counts among its most beautiful holdings books of worship from St. Andrew's Cathedral, including 55 Bibles, 32 missals, 23 hymnals, and 18 breviaries, as well as musical scores and various books of devotion and pious meditation - which were never discarded but exchanged regularly for newer versions. Together these offer a vivid picture of St. Andrews during its first century and form a museum of Catholic life in Victoria, where the books' beautiful binding and ornate decorations illustrate a living memory of the priests and worshippers at daily prayer.

An overwhelming proportion of the Seghers books are written in Latin, which was then the official and universal language of the Church, and which was expected to be so eternally. It is a tragic irony that the language that was employed to ensure posterity and readership is now one of the main obstacles to use of the collection."

The image on the right shows an ornate Roman Catholic missal, one of 117 liturgical books in the collection. Its elaborate set of bookmarks allows a reader to mark multiple pages.

In this book from the Seghers Collection, the torn spine reveals its binding and signatures.

From "Tradition and Transformation"

"In the next chapter of its history, the Seghers Collection will provide boundless exploration for new readers, researchers, and users: students, medievalists, Renaissance scholars, art historians, rare book specialists, archivists, and librarians. Together, they will join the ranks of theologians, members of the clergy, and classical scholars who form the history of the collection's readership. Today and in the future, these books bear the promise of new worlds, where tradition and transformation may be reconciled."

The Transgender Archives: Foundations for the... >