This publication commemorates the fiftieth anniversary of The Malahat Review. Edited by John Barton, editor of The Malahat Review from 2004-2018, the publication features essays, critical commentaries, and memoirs from past and present editors, contributors, and editorial board members, as well as nationally prominent writers with long associations with the magazine. It outlines the magazine's fifty-year history, its role in the lives of Canadian writers, and its international legacy.

On the cool twelfth of November 1965, ten men dined in the Princess Louise Room at the Empress Hotel on Government Street in Victoria, British Columbia. They were served seafood cocktail, consommé, roast beef, and Yorkshire pudding. For dessert, strawberry parfait.

So begins Nicholas Bradley's essay "Islands and Empires: Beginnings," describing the fateful night in 1965 when Robin Skelton and John Peter, co-founders of The Malahat Review, met with the first members of the magazine's editorial board to discuss the details of would become one of the most prestigious literary publications within Canadian borders and beyond, attaining an international standing that it retains to this day. It is the story of a watershed event in Canadian literature.

Indeed, The Malahat Review has a storied past shaped by the ambitious, visionary (and sometimes eccentric) personalities of the writers whose words appear in its pages and the editors responsible for getting those words on the page. It features the most recognizable names of modern literature. In any given issue, you might find something by Margaret Atwood, Dionne Brand, George Elliott Clarke, Joyce Carol Oates, Michael Ondaatje, P. K. Page, Al Purdy, or Carol Shields. Look a little further, and you might come upon a story by Samuel Beckett, poetry by Robert Graves, letters by D. H. Lawrence, art by Tony Hunt Sr., an interview with Anthony Burgess or Vikram Seth, or translations of work by Jorge Luis Borges. Marilyn Bowering, Robert Bringhurst, Lorna Crozier, Seamus Heaney, Patrick Lane, Dorothy Livesay, Susan Musgrave, Herbert Read - the list goes on.

The contributors in the newest volume in the University of Victoria Libraries' publication series will also, no doubt, be familiar to readers. A joint publication from The Malahat Review and the Libraries (which hold the journal's archives, as well as the archives of its founders, Robin Skelton and John Peter), The Malahat Review at Fifty: Canada's Iconic Literary Journal is edited by John Barton, editor of The Malahat Review from 2004-2018. It features contributions from current figures of Canadian literary culture such as Eve Joseph, Philip Kevin Paul, Yann Martel, Eliza Robertson, Shelagh Rogers, Patricia Young, and Jan Zwicky.

Below are excerpts from essays by Zwicky, Martel, Caroline Riedel, Curator of Collections at the University of Victoria’s Legacy Art Galleries, and Heather Dean, Associate Director of Special Collection at the University of Victoria Libraries (you can watch Dean's Faces of UVic Research video here and read her interview about writers' archives with Christine Walde, general editor of the Libraries' publication series and poetry board member for the Malahat, here). These excerpts are intended to give a sampling of what some of these longtime readers, writers, and editors of The Malahat Review have to say about the past, present, and future of Canada's iconic literary journal.

Draft of the menu for The Malahat Review editorial board dinner on 12 November 1965 at the Empress Hotel.
John Peter (left) and Robin Skelton (right) on a break from working on The Malahat Review, 1967.
Duo by Herbert Siebner, c. 1970 (University of Victoria Legacy Art Galleries).

From "Ever More Distinctly Canadian: The Malahat's Relationship with the Visual Arts" by Caroline Riedel

"Artwork published in the Malahat provides clues about [Robin] Skelton's social landscape. He was a great social and creative catalyst, the 'magus in the middle of it all,' as former colleague Jennifer Waelti-Walters described him. In 1971, along with artists Herbert Siebner and Maxwell Bates, he co-founded the Limners art group, whose members are often cited for their strong role in shaping Victoria's emerging modern art scene. For the next decade, cover art and essays brought attention to painters Siebner and Bates, sculptors Elza Mayhew and Robert de Castro, figural artist Myfanwy Pavelic, and printmakers Pat Martin Bates and Karl Spreitz, who were all part of this tight-knit group." 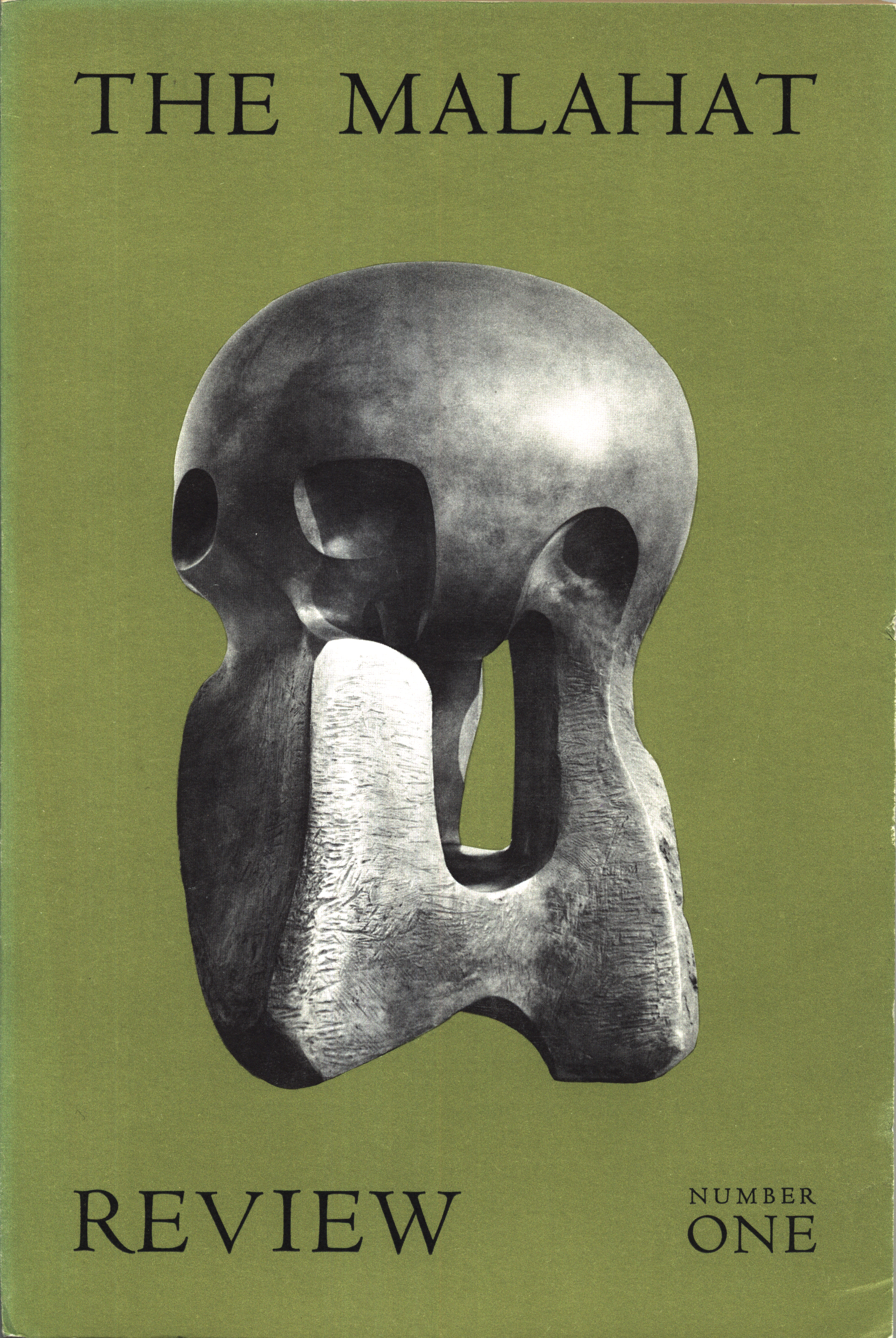 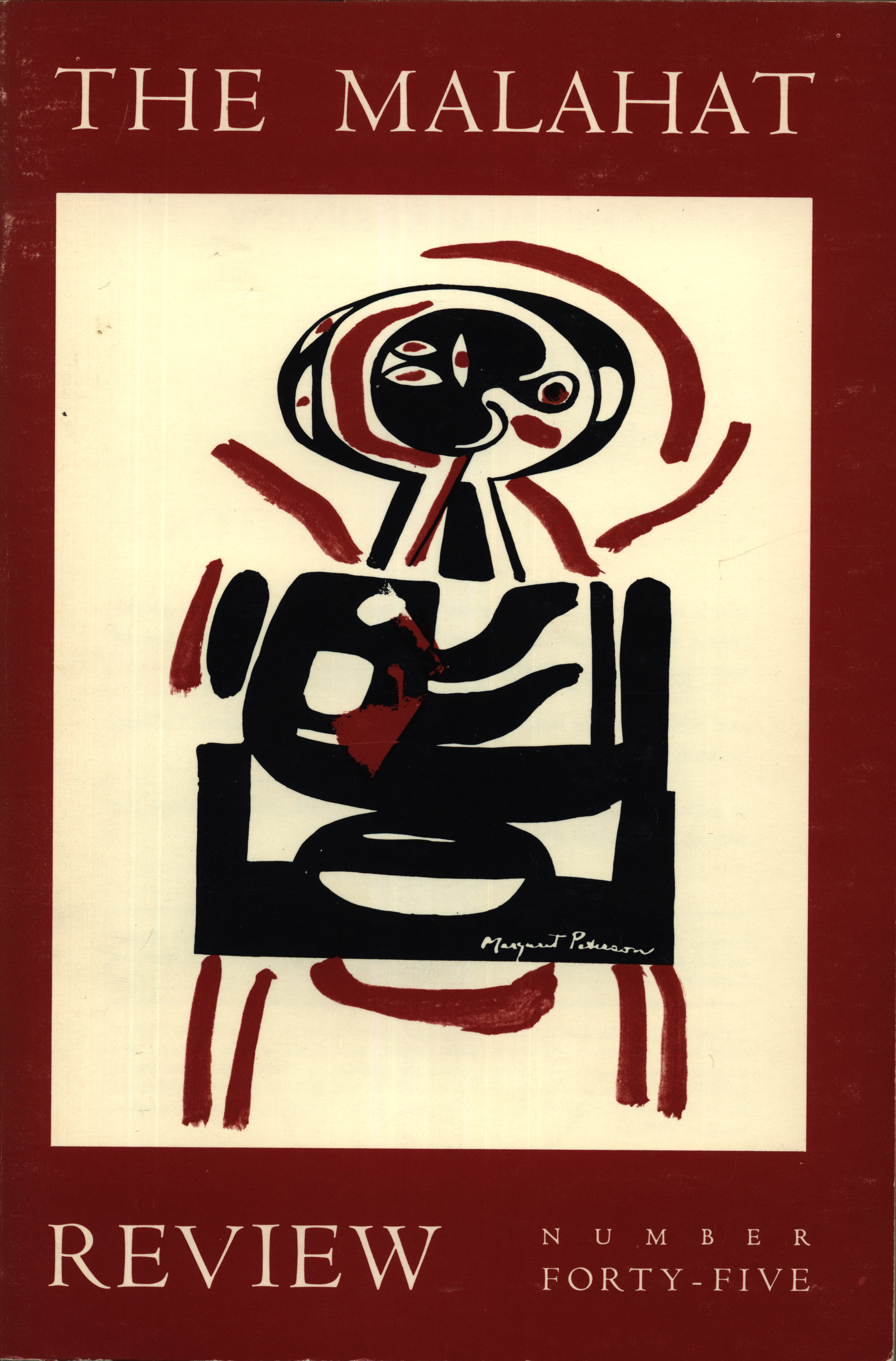 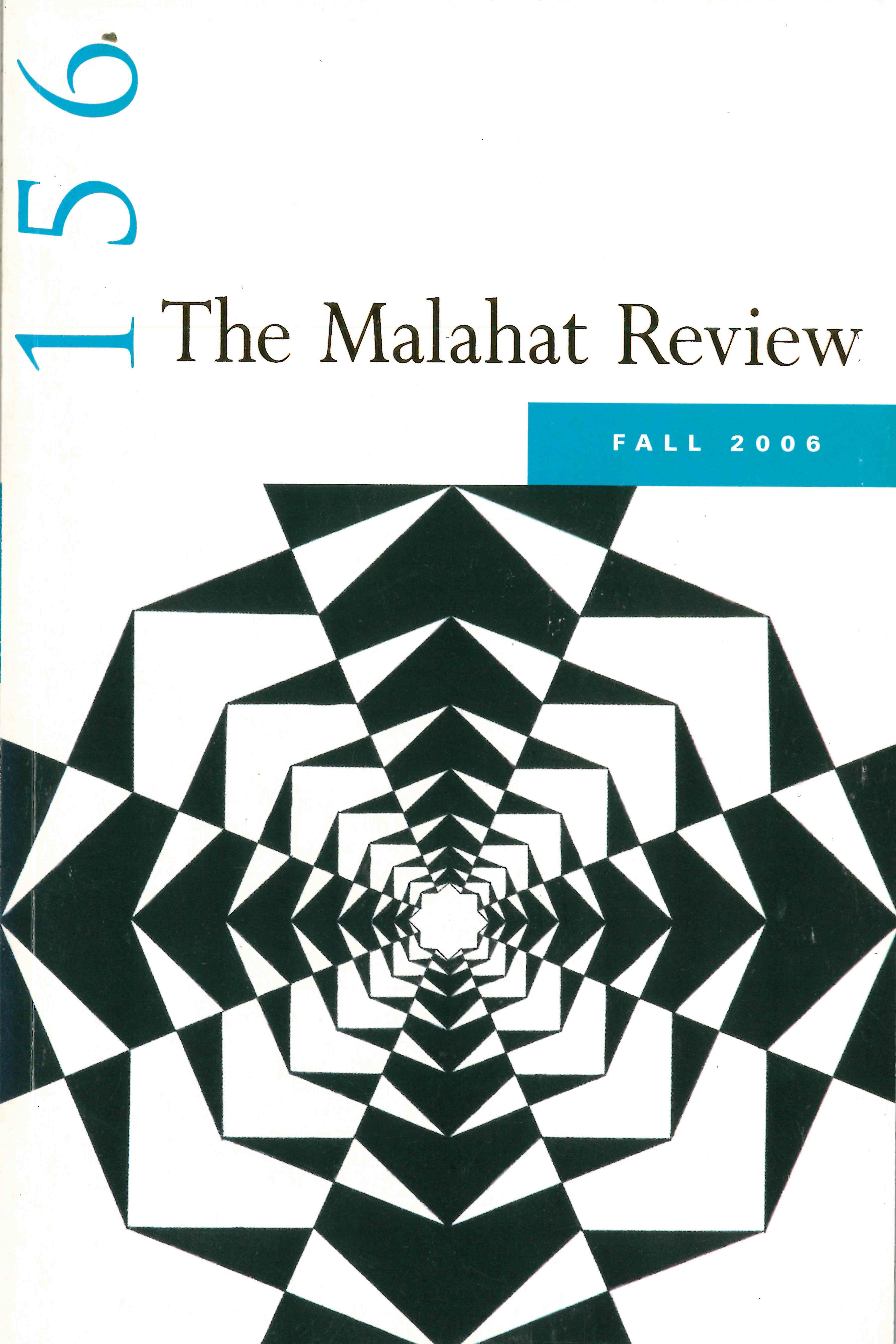 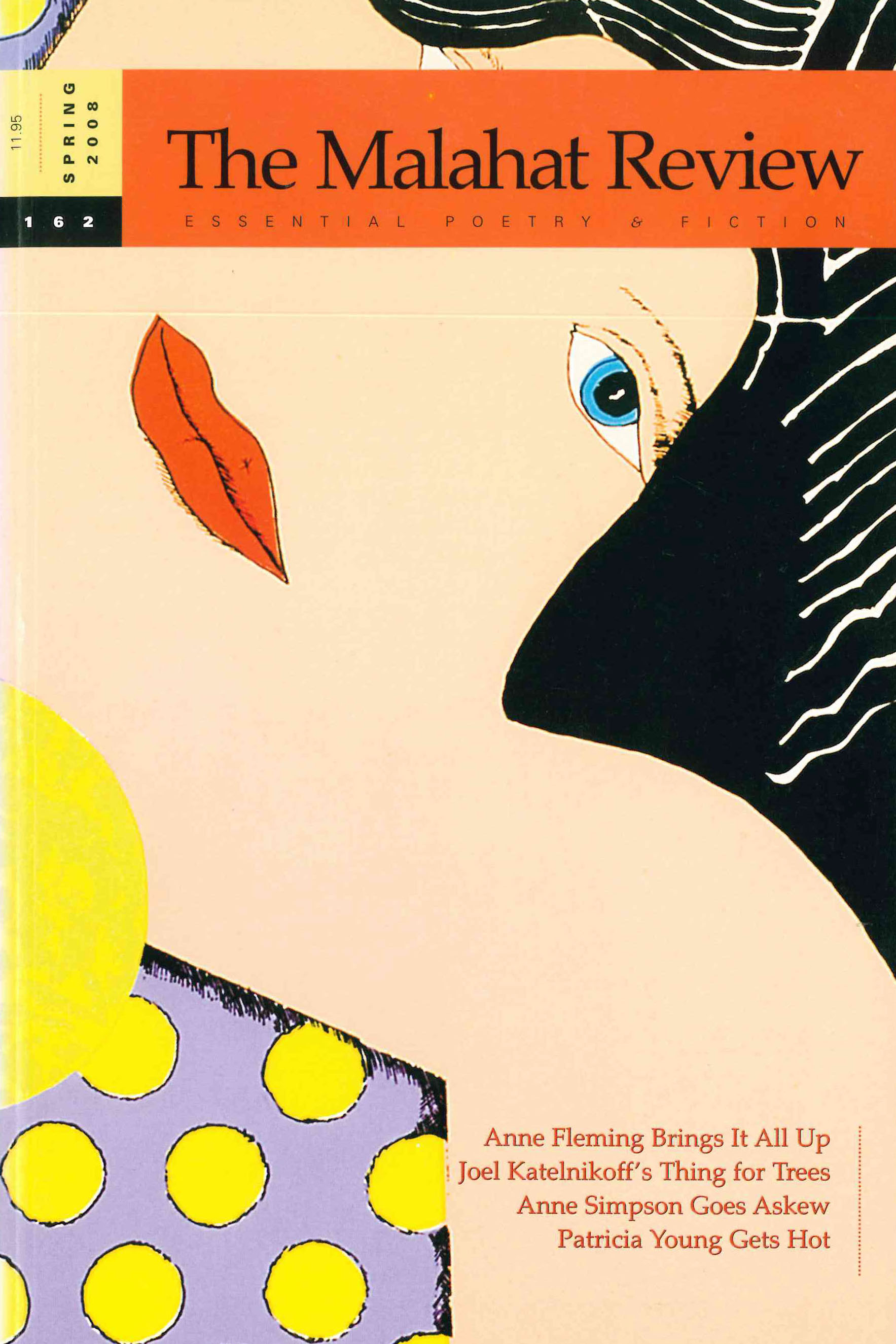 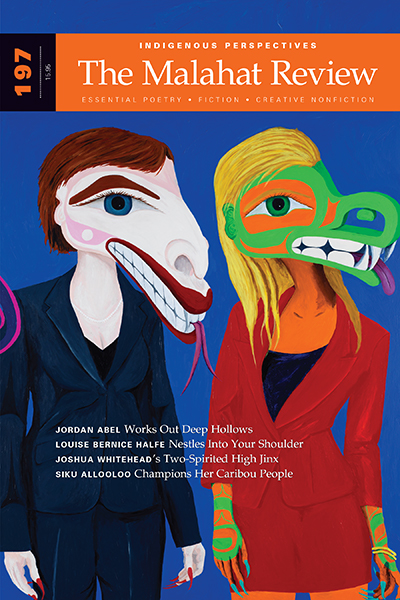 Notebook drawing by Scottish poet W. S. Graham, whose work appeared in several issues of The Malahat Review. His archives are housed in the University of Victoria Libraries.

From "Why Do I Keep Reading the Malahat?" by Jan Zwicky

"The short answer is quality. But it has taken me five minutes to settle on that last word. . . . 'd like to propose that we might mean by it something like 'well made.' This is a notion that I've seen acknowledged in cultures that are predominantly oral and nomadic as well as in cultures that are predominantly literate and urban. Indeed, it appears, that the idea of something's being well made looms larger in nomadic or genuinely rural cultures where staying alive depends on the kayak gliding swiftly, the net not breaking, and the roof thatch shedding rain. 'But those are necessities,' someone might say. 'It's not the same with things like art where aesthetic judgment is involved. Don't people approve certain sculptural lines over others, certain patterns in the weave, or certain rhythms and phrasings, even certain subject matters, in the stories? Aren't a lot of these judgments determined by tradition? And isn't all such traditionally conditioned judgement oppressive, especially when it crosses cultural boundaries?"

Worksheet for John Betjeman's "The Bay of Anglesey," published in Issue 1 of The Malahat Review, 1967. Betjeman's papers are held in the University of Victoria Libraries.

From "Proof Positive: The Malahat Review Archives" by Heather Dean

"Within fourteen weighty banker boxes, gifted to Special Collections and University Archives at the University of Victoria Libraries at five points between 1984 and 2008, is the record of The Malahat Review, with documents including correspondence, drafts of authors' contributions, and printers' proofs. The contents of the fonds - the various letters, typescripts, proofs, and other material - tell the story of The Malahat Review. . . .

Fittingly, Robin Skelton and John Peter were intrigued by the archival, in the unpublished and in-progress context out of which finished works materialize. In a brief history published in 1972 as an introduction to the index of the Malahat's first five years, Skelton notes that in addition to poetry, fiction, drama, and artwork, '[w]e also decided to open our pages to original literary documents, editions of previously unpublished letters by important writers, and literary memoirs, and the worksheets of living poets.'

These worksheets, essentially a progression of handwritten and typescript manuscripts, show the creative process and craft of writing, which culminate in a final, realized version, an evolution normally unseen by readers. The first issue features drafts of John Betjeman's poem 'The Bay in Anglesey,' drawn from Betjeman's papers housed in Special Collections at the University of Victoria Libraries."

Issue 92 of The Malahat Review, 1990. "The Facts Behind the Helsinki Roccamatios," which won the Journey Prize in 1991, appears in this issue.

From "How the Words Came" by Yann Martel

"A while later, there was mail for me. A rare occurrence. The letterhead on the envelope said it was from The Malahat Review. I had never heard of it. Some sort of magazine. I opened the envelope. It was a one-page note from a Connie Rooke, the editor, informing me that they were pleased to accept my story 'Mister Ali and the Barrelmaker' for publication. . . .Connie went on to publish two other stories of mine, 'The Facts behind the Helsinki Roccamatios' and 'The Time I Heard the Private Donald J. Rankin String Concerto with One Discordant Violin, by the American Composer John Morton.' The former won the Journey Prize, I found an agent, a collection of stories was published by Knopf Canada, and so on. I became, to my surprise, a writer. I had done the necessary preparation - those nice long hot baths, that luxuriating in oisiveté - but The Malahat Review was the key enabler. Connie Rooke was the midwife who birthed the writer I became. Without her, without The Malahat Review, I wouldn't be the writer I am now. You have to start somewhere in whatever you do, and my first real step as a writer was with The Malahat Review."