After years of prolonged absences, Holiff cited his family as one of the major reasons for his decision to quit Cash, insisting that he wanted the opportunity to spend more time at home and be more involved in raising his children. In an audio diary from 1973, he takes stock of his life, noting that he still cannot manage to fully involve himself with the activities of his household despite his gratitude for his family. On the subject of the kids, he remarks that he "still would like to get out and toss a ball around with them and kick a ball around with them," a recurrent theme in his correspondence and diaries, then that he should do more to help out around the house: "I feel guilty about it, I guess."

However, even after his retirement, Holiff had a difficult relationship with his children, perhaps in part because his own father had been distant and stern. Audio recordings in Holiff's archives allude to severe physical punishment from his father when he was a child, and the only references to his father's death in August 1961 occur when he mentions in his letters that it has "upset" or "goofed up" his "working tempo." He later wrote to his son Jonathan that he did not hear the word love at all when he was growing up. 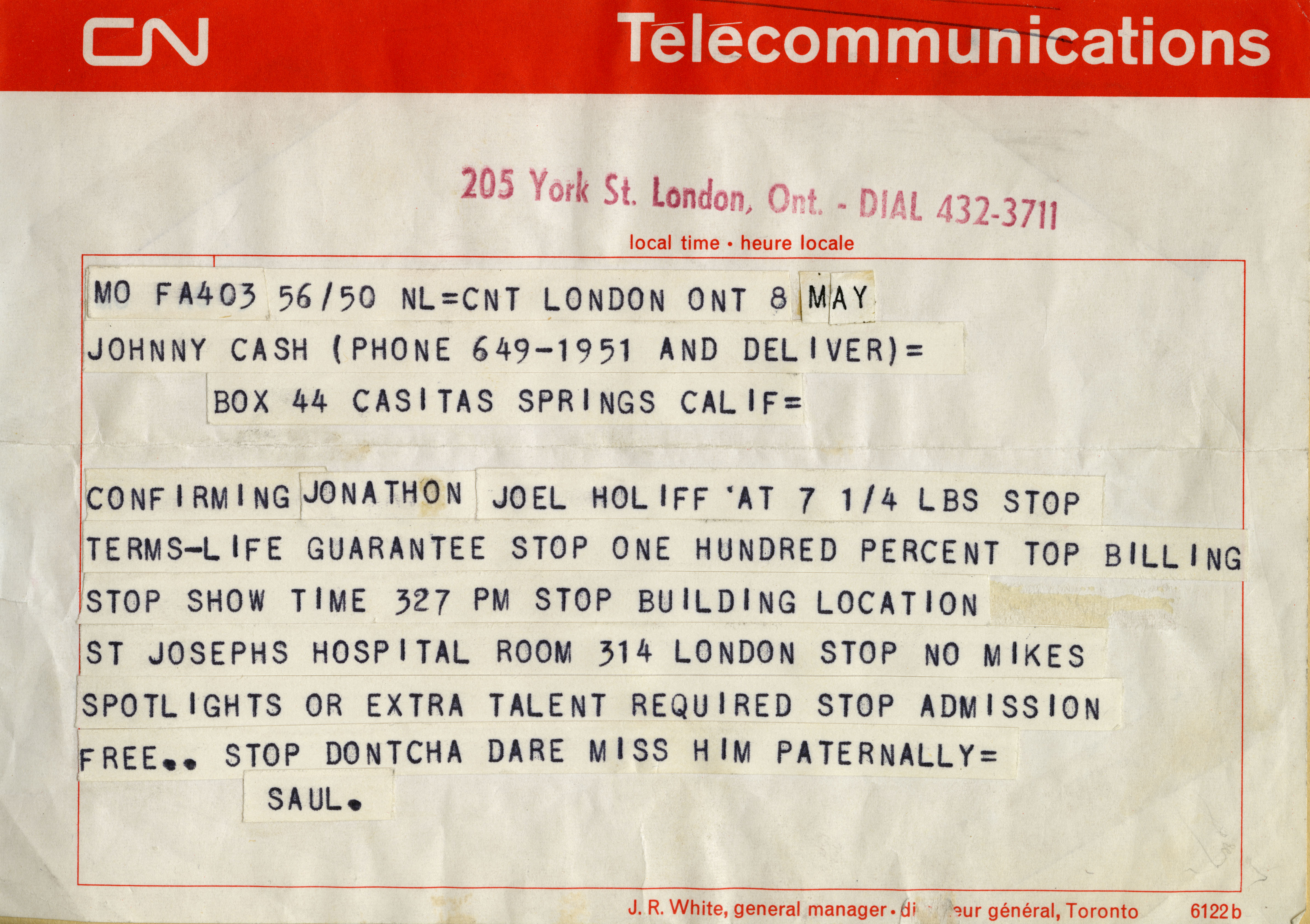 Telegram from Saul Holiff to Johnny Cash informing him of Jonathan Holiff's birth, 8 May 1965

Holiff tended to approach parenthood the same way he did his job. The telegram he sent to Cash announcing Jonathan's birth, for example, is written in the same style as his promotional materials, and he printed it as an advertisement in the London Free Press with the introductory line, "Saul Holiff in association with Barbara Holiff proudly presents." Underneath the image of the telegram is the following text: "Jonathan hopes you'll all come to his Daddy's upcoming shows here in London because his Daddy needs the money!!"

An article published in the London Free Press in 1980, seven years after his resignation as Cash's manager, alluded to Holiff's complicated feelings about parenthood: "although he says he doesn't miss them, he looks back at his days in management as being a little less complicated than real life; life as a student, father, husband, stock-market player. 'There's nothing so uncomplicated,'" Holiff is quoted as saying, "'as two suitcases, a hotel room and a bus outside to pick you up at an unspecified hour - no responsibility.'" Near the end of his life, in the interview he recorded for Steve Paikin, he acknowledged, "I guess parenthood didn't work for me."

< The Holiff Family A Documentary Journey: Searching for a Father... >