Notes by Saul Holiff about his personal medical history

For the most part, Holiff's life after retirement kept him close to home, particularly after he and Barbara moved to Nanaimo and his health worsened. He had always been prone to introspection, his personal notes full of aphorisms about the best way to live one's life such as "Actions speak louder than words," "Living well is the best revenge," "Most things are not worth getting upset about!", and "What's done is done." As early as nineteen, his journal entries show an intensely critical self-reflection, and he practiced this self-analysis throughout his life. In June 1995, he compiled a list of his negative personality traits and insecurities that he titled "My life to 70."

But his notebooks from the 1990s and 2000s show his growing preoccupation with his health. As he had conceded to Barbara early on in a 1963 letter, he had long been preoccupied with death, but the time and manner of his death became a fixation as he moved past middle age. With members of his family having died of heart attacks and strokes at fairly early ages, he began to calculate the likely time frame of his own demise. Among his notes is a ten-page chronological list of his medical history from 1935 to 2000, which includes a detailed inventory of minor ailments to major operations. Another entry in one of his notebooks, dated 20 April 2000, reads, "I have about 500 days (12000 hrs) still on deposit," while other notes consistently express the sentiment that "My days are numbered" and "I'm living on borrowed time." 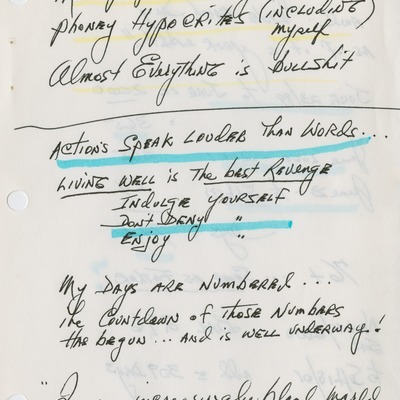 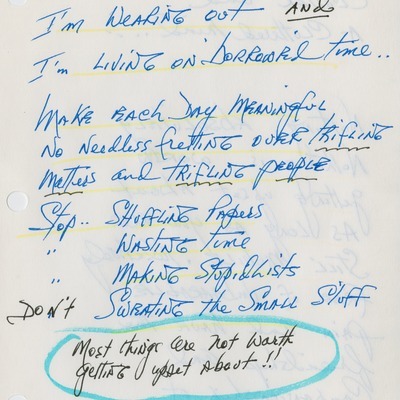 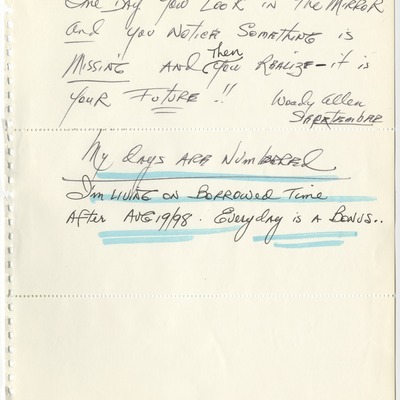 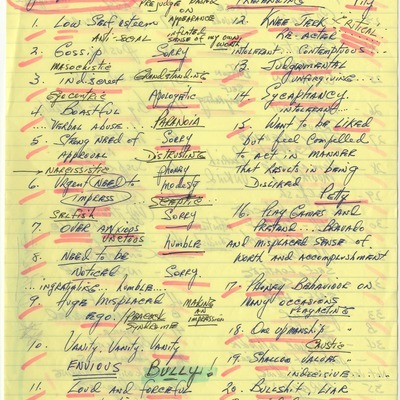 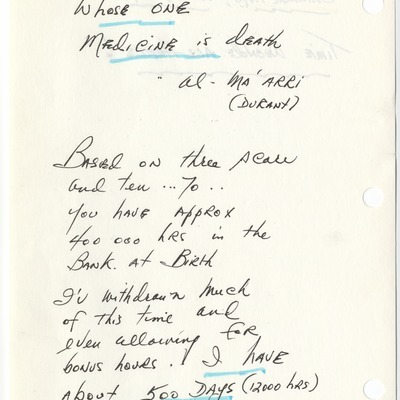 Obituary of Saul Holiff in The Globe and Mail

Troubled by the idea of a long, drawn-out death, with no agency to decide whether he wanted to live any longer, Holiff began to follow the "death with dignity" movement, which asserts that people should have the right to choose when and how they die, particularly if they are terminally ill. Holiff believed in this principle wholeheartedly. He subscribed to the Hemlock Quarterly and closely followed news stories of assisted suicide and the movement to legalize assisted suicide.

Adopting the movement's language of "final exit" and "self-deliverance," Holiff began to plan his own death. As his obituary in The Globe and Mail reported, he died in March 2005 "at a time of his own choosing."