Holiff took his retirement as an opportunity to embrace other pursuits, including hosting a television show on Cablecast in London called The Ego's Nest (describing himself in the advertisements for it as "devil’s advocate, maverick, muckraker, storyteller, disturber, ombudsman, iconoclast”) and writing a column, "Eat, Drink, and Be Wary," as a restaurant critic for the London Free Press. These projects were both fairly short-lived, but they demonstrate his keen investment in intellectual and cultural pursuits.

Most significantly, however, Holiff fulfilled his longtime wish to return to school. He had completed two years at the London Central Collegiate Institute and earned a certificate in Commercial Canadian Vocational Training at the Training and Re-establishment Institute in London, but he had always felt insecure about not finishing high school. When he retired, he sought to complete his education. In 1973, he enrolled in an undergraduate degree at the University of Western in London.

Part-way through his schooling, he and his family moved to Victoria, and he graduated from the University of Victoria in 1983 with a bachelor's degree in history.

A voracious reader his entire life (his personal notes show that he kept lists of books to read, as well as lists of vocabulary words), he also took English courses with professors such as Constance Rooke (editor of the literary journal The Malahat Review at the time), and his assignments on Ernest Hemingway and other authors are evidence of his love for and deep critical engagement with literature.

Diploma of Saul Holiff, University of Victoria Bachelor of Arts

His university degree was apparently his proudest achievement, and he felt strongly enough about his experience as a mature student, having returned to school at fifty years old, that he established a scholarship for mature students in History at the University of Victoria. The Holiff Family Mature Student Scholarship lasted from 1984-1988.

He even entertained the thought of pursuing a master's degree in creative writing; as he wrote to his sister, Ann, after his graduation, "If I proceed in this direction, it could lead to a thesis centred around the show-biz book I've always wanted to do." 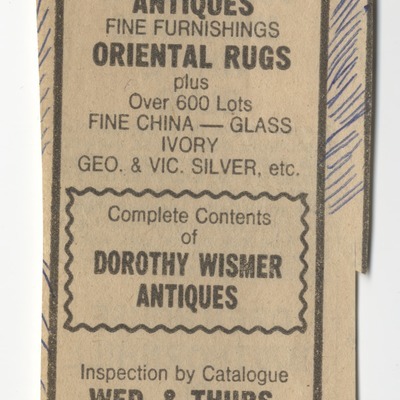 He never did write that book, unfortunately, and he mostly avoided show business for the rest of his life. He had resigned as manager for Tommy Hunter and Debbie Lori Kaye in 1970, and he continued to manage the Statler Brothers until 1978, but they were his only act.

Holiff even auctioned off several of the 28 gold records he had accumulated as Cash's manager. According to an article in the London Free Press in 1978, Holiff donated at least two while he still lived in London: the record for The World of Johnny Cash, which he donated for an auction held by the Theatre London, and the record for the sale of 35,000 copies of At San Quentin in Belgium in 1972. He also donated at least one record while he lived in Victoria, this one through Kilshaw's Auctioneers in Victoria. The proceeds were donated to the restoration fund for the Temple Emanuel synagogue.

Saul and Barbara were very involved in local politics and culture when they lived in Victoria. They declared themselves Humanists and became part of the Society for Humanistic Judaism and the Humanist Association of Canada - Victoria Chapter. A longtime pacifist, Barbara became secretary of the Greater Victoria Disarmament Group, and Saul periodically wrote letters to the editor about local and global politics, as well as restaurant reviews for Monday Magazine.

The picture of Holiff at the Oak Bay Beach Hotel (right) appeared in an article called "Saul Holiff's Victoria," which was published in London Magazine in September 1986.